To share your memory on the wall of David Jones, sign in using one of the following options:

Print
David F. Jones passed away March 19th, 2021 in Greeley, CO. He was born to Fred Jones and Rebecca Reed on September 15, 1936. He grew up in Lafayette, CO and joined the military out of high school.

He was a member of the Elks Lodge #809 for 50 years. He worked for Ma Bell for almost 40 years. He enjoyed volunteering through the Elks, bowling, fishing, hunting, golf and poker.

He was preceded in death by his parents, son Eric, son-in-law Carl Miller and grandson Andy Miller.

Services will be held 2:00 pm April 9th, 2021 at Adamson Life Celebration Home at 2000 47th Ave in Greeley, with a reception following. Interment will be held at a later date at Hahn's Peak Cemetery.

Memorial contributions may be made to the Elks Lodge #809.
Read Less

Receive notifications about information and event scheduling for David

We encourage you to share your most beloved memories of David here, so that the family and other loved ones can always see it. You can upload cherished photographs, or share your favorite stories, and can even comment on those shared by others. 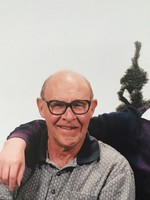