To share your memory on the wall of Mae Bashor, sign in using one of the following options:

At college Mae enjoyed a busy social life and had many suitors, but the fellow who stole her heart was a handsome young bullrider named Bill Bashor. The couple married on April 16, 1951, and moved to the Bashor family ranch at Grover where together they ran a successful ranch and raised their three kids. Mae was hardworking and industrious and turned a dirt patch into a gorgeous yard with green lawn and flower beds. She helped plant and nurtured hundreds of trees around the place. She was a fantastic cook and an even better baker and there was rarely a day when there wasn't a delicious homemade dessert on the table. Her cinnamon rolls could put Cinnabon to shame!

Mae worked numerous jobs to help the family out, including grocery store clerk, bank teller, school bus driver, and a stint traveling the countryside, with youngest daughter in tow, selling Avon to farm and ranch wives. She loved makeup and dressing well and in the late 60s and early 70s she definitely was not afraid to rock a short dress and high boots! Mae also loved red cars and would fly down the gravel roads doing 80 mph in one of her red cars. She made sure her kids all learned how to swim and ice skate, and she was adamant they would all attend college, which they did.

Living on a ranch with neighbors miles away can be lonely and challenging for some, and there was always a restlessness to Mae. Although Mae and Bill's friendship lasted for life, their marriage unfortunately did not. In 1984 Mae started a new chapter, moving to Estes Park where she lived for several years. She enjoyed hiking and summited Longs Peak numerous times. She had elk in her front yard, and made many new friends. At some point she got tired of mountain winters and shoveling and lit out for the warmer climate of Arizona, where she lived happily for 20 years. She hiked the deserts and took a class to become a Master Gardener. Her yard was a magnificent sanctuary with native southwestern plants.

In 2013 Mae moved back to Colorado to be closer to family. Unfortunately her last few years she was not able to enjoy all the activities she so loved due to dementia. Although the dementia stole her memory, it did not steal her good humor, personality and essence and she remained positive and fairly happy to the end. Her daughter Cheri made sure all of her needs were met, and she was able to live in her own home until July. The family would like to thank Greeley Village and Bristol Hospice for making her last few months comfortable.

Mae was a beautiful, intelligent, complex, adventurous, free spirited woman. Hopefully she is riding off into the sunset, pedal to the metal in a shiny red car!

Due to Covid, no services are currently planned but the family intends to have a private celebration of life sometime in 2021. The family suggests donations be made to the Dementia Society of America, or your local food bank or food pantry.

Family and friends may leave condolences at www.adamsoncares.com
Read Less

Receive notifications about information and event scheduling for Mae

We encourage you to share your most beloved memories of Mae here, so that the family and other loved ones can always see it. You can upload cherished photographs, or share your favorite stories, and can even comment on those shared by others. 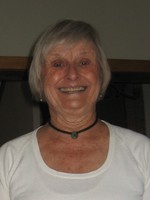