To share your memory on the wall of Oren Sprague, sign in using one of the following options:

His work career included Arizona State University and he finished his career as Vice President of Michner Library at University of Northern Colorado. He was an active church member and Pastor at Community of Christ Church in Greeley, Colorado. After Joanne's death he became volunteer at Bonnel Good Samaritan Center where he won several awards for his service.

He is proceeded in death by his parents, wife Joanne, sister Lois and daughter Debra.

Per his request there will be no services or memorials, he just asks that you continue to give to the charities of your choice.

Family and friends can leave condolences at AdamsonCares.com.
Read Less

Receive notifications about information and event scheduling for Oren

We encourage you to share your most beloved memories of Oren here, so that the family and other loved ones can always see it. You can upload cherished photographs, or share your favorite stories, and can even comment on those shared by others.

Posted Jun 04, 2021 at 05:16pm
I have so many wonderful memories, I am so lucky that my Uncle was such a positive present in my life. My first memories was when I was 5 and we lived in Chico and Uncle Oren/Bubbles came to visit us in the house we live in. He was in the Navy and he was wearing his white uniform. Later years, we both hate cemeteries, but we love to visit old old cemeteries and read the headstones because there was so much history on them. Knowing that he had a sinus problem, one year for his birthday I gave him a 24 roll pack of toilet paper, the good kind! Uncle I sure do love you and I sure am going to miss you!
Comment Share
Share via:
RQ

Posted May 29, 2021 at 02:23am
What a smile, what a laugh. You know it anywhere. Constant good cheer, funny stories and that smile. I will never forget him. Family reunions won't be the same without him.
Comment Share
Share via:
D

Thank you Robin, for the support and kind words. He always looked forward to reunion it was the highlight of his summer
D

Posted May 28, 2021 at 10:26pm
I couldn't have asked for a better man to be my father, he wasn't perfect, he didn't know all the answers, and sometimes I wasn't his focus. But he was loving, he was patient and he always made time for us kids. He taught me what made a man a good person, how to share, how to listen, how to shut up and when to speak up. That you can't receive love without giving it. And most importantly every effort is its own reward. I will miss you every day but I will thank you every day.
Comment Share
Share via:
BR

Posted May 27, 2021 at 12:16am
Oren would always stop at the Bonell reception desk and share 1 or 2 great jokes. I looked forward to seeing him and am so sad he's gone. Oren was one of the kindest men I've known and I am honored to have been his friend.
Comment Share
Share via:
D

Thank you Beth, the people of bonell were the highlight of his daily life. After mom passed he was at a loss as to what to do, I reminded him that there was no reason to stop seeing the friends he had made at bonell and the next thing I knew he was a volunteer... thank you all for filling his life. 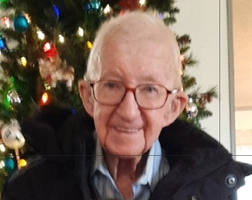