To share your memory on the wall of Vernon Filsinger, sign in using one of the following options:

Vern married the love of his life, Mary Rose Van Ert in 1951 and he moved to Wayne, Nebraska gaining employment at a local auto dealership. His skills rapidly advanced him to the position of service manager. In 1962 Vern made the decision to “go west” and he moved his young family to Greeley, opening a Skelly Gas Station where his reputation as an excellent auto mechanic became widespread in the community. The demand for his skill set forced him to leave the gas pumps behind and focus on auto repair in the shop that he proudly called “Verns Auto Service and Towing”. Between towing for the City of Greeley, the Colorado State Patrol and his mechanic trade he provided a living for his family of seven children. Vern was a dedicated family man and husband, he loved to play the card game of Cribbage with anyone who dared, including his children. In his later years Vern would hunt, venturing into the mountains in search of that elusive elk.

He was preceded in death by his parents and sister Elaine, his loving wife Mary Rose, his daughter Theresa (Weiderspon) and his son Brad.

He is survived by his daughter Michelle and sons Todd, Cary, Kurt and Gregg. He was the patriarch to twelve grandchildren and fourteen great-grandchildren.

Visitation will be 5:00-6:00pm on January 27th followed by a rosary at Adamson Life Celebration Home. Mass of the Christian Burial will be 9:30am on January 28th at Saint Peter's Catholic Church in Greeley Colorado. Interment will immediately follow the service at Sunset Memorial Gardens in Greeley. Due to Covid concerns there will not be a reception.

Receive notifications about information and event scheduling for Vernon

We encourage you to share your most beloved memories of Vernon here, so that the family and other loved ones can always see it. You can upload cherished photographs, or share your favorite stories, and can even comment on those shared by others.

Mike & Linny Carter, Your Mile High United Way Family, and other have sent flowers to the family of Vernon Filsinger.
Show you care by sending flowers

Posted Jan 27, 2021 at 05:50pm
We are so saddened by the loss of your dad and grandpa and our dear friend. We spent many days and years talking over the fence and on the phone too. We always knew when he was going to an outing or an adventure, letting us know why the house was dark. We loved to hear his laugh, his thoughts, his stories. I, Nora, would call him " should fertilize now "? I was always needing his advise with our terrible lawn. We really liked working with him. I think the first project that the 3 of did was the back fence. We went to home depot together and spent a couple days doing it, regretting to this day, not leaving a gate between the two houses. We will be forever, as long as we live here, WILL BE WANTING TO SEE THAT LIGHT....PEACE BE WITH ALL OF YOU
Lovingly,
Roger & Nora
Comment Share
Share via:
HS

Flowers were purchased for the family of Vernon Filsinger. Send Flowers

Tim and Andrea Wang purchased flowers and planted a memorial tree for the family of Vernon Filsinger. Send Flowers 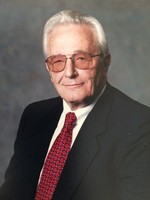